The article followed a Jan. 12 interview he gave on the Jim Bohannon Show, found here.

The article is available in print and online to LIBN subscribers only. It's included in its entirety below.

You’re watching the latest on the Jan. 6 insurrection inside the U.S. Capitol building and do a double take. Among those storming the Capitol on that infamous day is one of your employees. 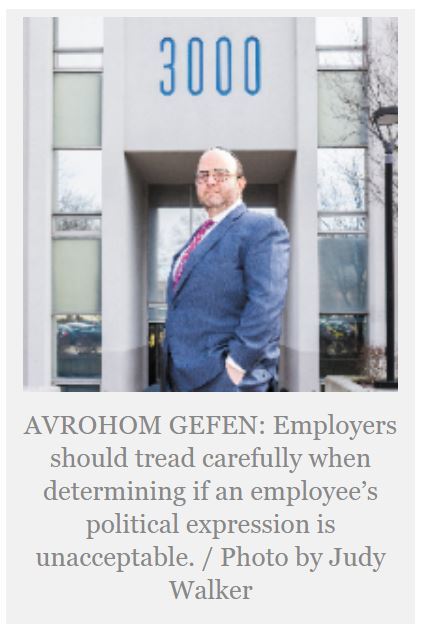 It’s a scenario playing out across the country, as the Federal Bureau of Investigation and online sleuths seek information on individuals captured in images inside the Capitol amid rioters. In some instances, employees are sharing images of themselves at the insurrection, inspired by what they considered to be patriotism. Some even told the FBI that “President Trump said to do so,’ according to published reports.

The insurrection left five people dead. Others – police and protesters – were hospitalized. There were materials stolen, including a laptop or hard drive from House Speaker Nancy Pelosi’s office.

“The mob was fed lies,” Senate Majority Leader Mitch McConnell said. “They were provoked by the president and other powerful people.”

But the scenario has already prompted employers to ask: When does political expression become unacceptable – even for those who believed they were doing the right thing?

Experts draw the line at lawful versus criminal activity.

“If you were standing at the march, or walking with [protesters], that remains lawful,” Gefen said. But images showing employees storming the Capitol is prompting employers to discipline.

New York has laws that protect employees who engage in lawful activities while off-duty, which can include participating in a political protest. But once that participation crosses over to criminal activity – a trespass, for instance, or an assault – these laws no longer offer protection for employees, who could wind up terminated.

“New York is an at-will employment state, where employees can quit or be fired for any reason unless it’s contrary to labor laws, or discrimination laws come into play,” said Jillian McNeil, an associate with the law firm Jaspan Schlesinger, in Garden City.

And “once there’s violence and a riot involved, employers have the right to terminate,” said Danny Carrascal, an attorney with Meltzer, Lippe, Goldstein & Breitsone, a law firm in Mineola.

That can hold true even if the person isn’t rioting or looting, he said.

“It could be a matter of perception, public relations,” he added. If an employee is “next to someone looting, an employer could say, ‘We don’t want that image for our company.’”

The same can hold true for anyone promulgating hate speech.

“Hate speech and racist remarks are not going to be protected,” Carrascal said. “An employer can terminate you for that.”

Still, employees often mistakenly evoke the First Amendment, believing that it protects their right to say whatever they want. “That’s not how it works,” Carrascal said, noting that the First Amendment prohibits the government – not private companies – from inhibiting free speech.

It’s when those employees display symbols of hate – a “Camp Aushwitz” shirt or a noose, for example – “it’s seen as attacking against a protected class … It’s not allowed,” McNeil said. Such activities can be seen as a hostile environment for coworkers “and can be grounds for discipline.”

Still, the line crossed can sometimes be left to debate. There could be questions for example about whether entering a federal building itself is illegal or not. “It may depend on the situation on the ground,” Gefen said. In some instances, there were reports of “police officers allowing people into the Capitol building – it could be argued that someone with apparent authority was allowing me in.”

That said, “employers have to tread carefully,” Geffen said.

With protests and marches increasingly prevalent, companies may want to review their employee handbooks and policies, updating them where necessary. This way, “employees are clear” on what the employer considers “unlawful activity,” Geffen said. “The code of conduct should be included in the handbook.”

Social media policies “should reflect grounds for discipline if an employee uses social media in a way that embarrasses a company,” Geffen said. The same holds true for wearing garments that espouse biased views.

In addition, employer policies should address displaying work badges or logos off-hours, as “it goes against the interest of a company to be associated with a violent protest – it crosses the line easily,” McNeil pointed out.

Still, employers should focus on developing and carrying out even-handed policies. For example, the employee captured on video looting the Capitol Building in January should be disciplined in the same way as an employee who was seen on video looting at a Black Lives Matter protest over the summer, McNeil said.

“Otherwise, you may find yourself in trouble for discrimination,” she said.

Still, employers “don’t want to discourage peaceful protest,” and don’t want to “stifle” employees from civic engagement, Carrascal said. Running for office, campaigning and political fundraising are all “lawful activities” in which employees are protected.

But when events turn into riots, there are “consequences,” he said.

It is when those activities turn unlawful that many employers determine it’s time to part ways.